Taking Barbecue to the Next Level 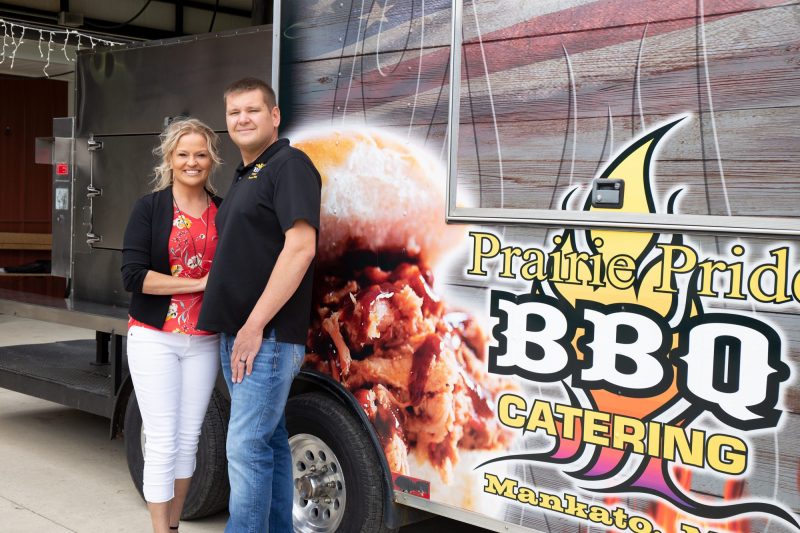 Summertime is barbecue time. At Prairie Pride Farm, Paul Hubmer and Brheanna Hubmer have taken the art of barbecue to a whole new level, creating a farm-to-plate experience that is darn close to perfection. The Hubmers’ Mankato business has three components: farm, catering, and farmers market.

First, they grow and grind their grain to produce wholesome, natural feed. Next, they pamper their animals, following heritage farming principles to produce quality chicken and pork products. Finally, they combine time-tested recipes and barbecue techniques to deliver the best-tasting chicken, chops, brats, sausages, and bacon you have ever eaten.

You can purchase their products and gift boxes at local farmers markets or through their website. If you’ve got a hankering for some good barbecue, give their take-and-bake dinners a try, visit their food truck, or have them cater your next event.

The Hubmer family farm goes back, way back. It was established in 1876, just a handful of years after the Civil War ended.

“I’m the sixth generation on my family farm,” Paul Hubmer said. “This is a century farm now.”

Both Hubmers contribute to their business in different ways. Paul Hubmer brings a wealth of farm experience to the table. Brheanna Hubmer adds a strong business and marketing background. The two share years of restaurant and catering experience and a passion for good food. It’s a great combination.

The Hubmers pride themselves on their environmentally friendly, humane farming processes. Prairie Pride is a Minnesota Water Quality Certified Farm.

“This whole farm is run humanely. Every animal is treated with the utmost respect,” Brheanna Hubmer said.

Their clover pastured, free-range chickens rule the barnyard (although the farm dogs might disagree). The Hubmers’ daughters, 13-year-old Arheanna and seven-year-old Rocky, hand place the newborn chicks in their nursery.

“We raise them in open-air barns so they can go off and pick alfalfa and grass. They also are fed a little corn, soybeans, and a little bit of base mix. We hand grind everything that we raise here to feed our animals,” Paul Hubmer said. “The chicken breed that we raise is a very blank palate. It takes on its environment. Good quality ingredients  – high-quality proteins, alfalfa, and grass – make a difference.”

The kid-glove treatment applies to their pigs, as well.

“We have great animal husbandry,” Paul Hubmer said. “We raise these pigs on our own non-GMO corn. It’s a very simple diet: corn, soybeans as their protein, and a little bit of minerals and vitamins. There are no antibiotics, and they’re growth-hormone free.”

Does all this effort affect the flavor? “Absolutely,” Paul Hubmer said.

Another thing that affects the flavor is the breed. The Hubmers’ pigs are not your average, run-of-the-mill pigs. Yes, indeed. These pigs are something special.

When you think of a pig, you probably picture a pink pig, like the Yorkshire breed. It’s one of the most common pigs in the United States. They’re quick-growing, disease-resistant, and produce inexpensive meat. That’s great if you want to produce a lot of pork fast, but not so great if you’re looking for world-class flavor.

The pigs at Prairie Pride Farm are Kurobata Berkshire pigs. If you’re wondering what the heck that has to do with the flavor of your pork chop, Paul Hubmer is happy to fill you in.

“This is 100 percent pedigreed, pure-bred Berkshire pork. It’s an old-world breed that dates back to England. It’s a black pig with some white accents, a little bit slower growing. But the meat quality and the flavor and the tenderness are far superior to any production pig that is out there,” Paul Hubmer said. “That’s what our customers really like, and that’s where we stand out in our market.”

Berkshire pigs have been known for their rare quality and flavor for over 300 years, according to the American Berkshire Association. It created the world’s first swine registry in 1875, which coincidentally is about the same time the Hubmer Farm was founded. The first hog ever recorded in the registry set the bar high for the Berkshire breed: It was the boar Ace of Spades and was bred by Queen Victoria.

Berkshire pork’s superior flavor is due in part to its well-marbled mix of lean meat and fat. That makes it more desirable and, yes, more expensive. The Hubmers will tell you it is worth it.

“I’ll put my pork chops up against any single steak there is, your fillet, your Wagyu, and I guarantee it will be just as good, if not better,” Paul Hubmer said. “This Berkshire pork is amazing.”

Speaking of Waygu beef, the Kurobata Berkshire is known as the Waygu of the pork world. It takes its name from a line of Berkshire pigs that were raised in Kurobata, Japan.

“Kurobuta is a Japanese term that translates into ‘black hog.’ Japan is a huge buyer in the Berkshire market,” Paul Hubmer said.

Prairie Pride Farm has sold its products online and at farmers markets in St. Paul, Burnsville, and Lakeville for years. This June, they joined the Mankato Farmers Market. Look for the Hubmers every Tuesday between 3 p.m. and 6 p.m. in the Best Buy parking lot on Adams Street in Mankato.

Prairie Pride products include fresh meats, uncured bacon and sausages, and their special barbecue sauce and rub. They sell gift boxes year-round. At Thanksgiving time, they add whole turkeys to the mix.

“A lot of our brats are precooked, so you can just toss them on your grill and warm them up,” Brheanna Hubmer said. “It’s nice for busy families or big families.”

The Hubmers hope to continue to grow their business over the next few years, especially in the Mankato and St. Clair communities. They see it as the natural next step in their farm-to-table adventure.

“We plan on expanding, possibly opening a brick-and-mortar meat shop,” Brheanna Hubmer said. “We’d both also love to open our own restaurant.” 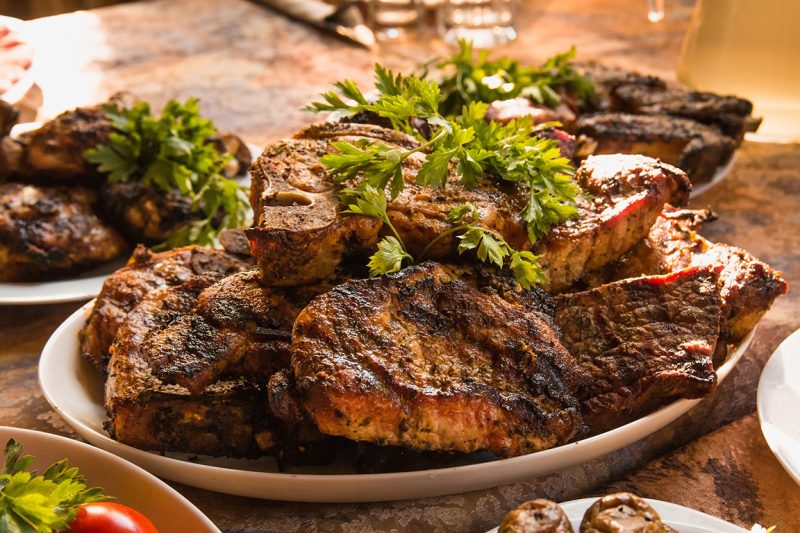 Now That’s Good BBQ
What makes a good barbecue? The Hubmers will tell you the first critical ingredient is time.
“It takes patience and time. Lots of time, trial and error,” Paul Hubmer said.
Brheanna Hubmer likes to help out in the quality control department: “That’s my job. Paul will say, taste this, does this taste good?”
The second requirement is to start with good, quality meat.
“Simplicity is key. Good quality meat is a must. We cannot stress that enough,” Paul Hubmer said. “We barbecue all of our own pork shoulders. People ask, ‘Why is your stuff so good?’ It’s the quality of the meat. That’s the number one thing.”
Prairie Pride has proven that combining their meats with barbecue is a winning combination.
“That’s why competitive barbecuers come to us for their meat products,” Brheanna Hubmer said. “That alone can help win the competition.”