For more than 30 years, there’s been a Sadaka family restaurant on the corner of Swiss Street and Madison Avenue. Opened by the late Charles Sadaka in 1987, Charley’s Restaurant and Lounge was a Mankato institution. When COVID threatened to close its doors, two of Charles Sadaka’s children stepped in to make it their own.
“We wanted to take my dad’s restaurant and update it. My dad worked so hard to get this corner of Mankato into the family. We wanted to make sure that what he built stayed,” C.J. Sadaka said.
“We just didn’t have the heart to let it go,” Nicole Wood said.
C.J. Sadaka and Wood opened Swiss & Madison in September 2021. The brother-and-sister team bring a wealth of restaurant experience to the table: C.J. Sadaka was head sous chef at Butcher & the Boar in Minneapolis and Wood has worked at some of the top restaurants in San Diego.
In addition to its new name, Swiss & Madison has a fresh new look. The space was completely remodeled and features an airy, modern design with plenty of flexible seating.
“We wanted a modern, casual feel,” Wood said.
Swiss & Madison’s menu combines popular dishes from the original Charley’s menu and new entrees, including seafood and pasta. A happy hour menu is in the works and new takeout meal plans are also available.
The restaurant’s kitchen has been upgraded as well, and now features a wood-fired grill. A second wood-fired pizza oven is planned for the bar area.
“It’s just like cooking over a campfire, except with grates,” C.J. Sadaka said. “I honestly believe that it’s the only way to eat a steak. It’s a smokey flavor you’re not going to get anywhere else.”
C.J. Sadaka’s homemade “smashburger” combines fillet, brisket and ribeye into two 4-ounce patties, which are topped with cheddar and served on a brioche bun. It’s their top seller. Other crowd favorites include the pan-seared scallops with carrot puree and fillet with beef fat steak sauce and cremini mushrooms. 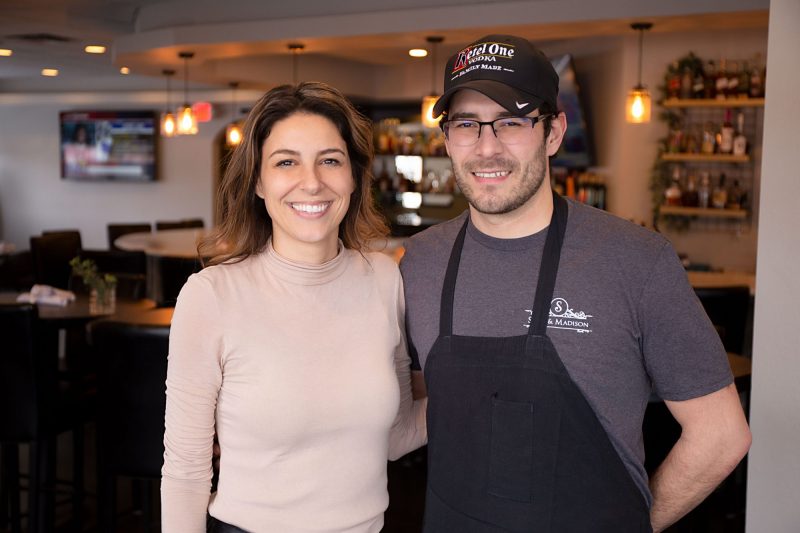